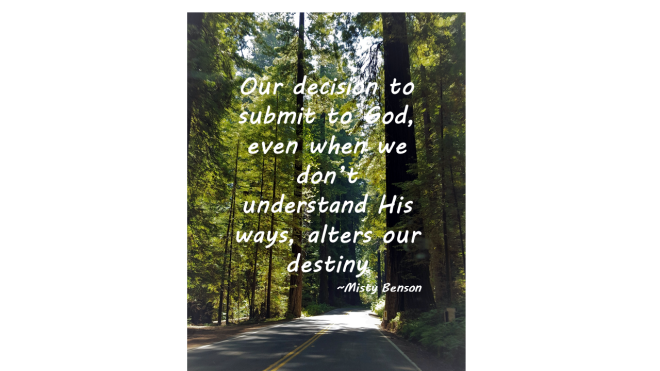 The Lord sent me to 2nd Kings Chapter 5 and told me to read it. It is the commonly told story of a leper by the name of Naaman, who went to the prophet Elisha and was very offended when he didn’t receive what he expected. You see, he was an important man in his country, as he was right hand to the King. But when he went to the Prophet of Israel, Elisha didn’t even come out to greet him or invite him in. He instead sent a servant to inform him of what he needed to do to be healed. Naaman was so angry! He was offended and felt dishonored by the prophet. In his pride, he left embittered and turned his back on the word of the Lord, all because God hadn’t shown up in the way he had expected.

So many times, I feel this is the way we live our lives as Christians. We go to God, or our pastors, or people who are willing to offer us counsel, and we ask them for help fixing our troubled life, but they don’t always meet us like we expect. This happens often in marriage counseling. Couples come on the brink of divorce and are surprised when their marriage isn’t miraculously fixed after just a few sessions. After all, haven’t they come to the people who fix marriages? They are offended when they are asked to go and do the hard things, like change the way they behave. In Naaman’s case, he was offended for several reasons. He didn’t get to see the important “Man of God” himself. Sometimes, people have left our church after visiting one time, because the “man of God” (aka the Pastor) didn’t personally greet them, or they are offended when “the pastor” isn’t the one to personally call them back or meet with them. Oftentimes we get so set on our own expectations that we miss sight of the offer for healing.

Naaman was also offended by what the prophet had to say. The river that he was told to go to was not as clean and pure as the rivers he was used to. He was offended that he was sent there. He wanted Elisha to come out and pray and wave his hand over his leprosy and for all the pain and disease to go away. But that is not what was being offered. In marriages, many times people want us to pray, wave our hand over their wounded hearts, and make the brokenness go away, but that is not what we have to offer. And that can be offensive.

Often, God chooses to offend our expectations (our desire for miracles and instant gratification of our problems). Many times He sends us on a journey to a place we don’t want to go, with only a small set of keys. He gives us our way to healing, but because we don’t like it’s package, or because it isn’t the miracle we want, we walk away from it angry, hurt and bitter that we didn’t get what we came for. Often times, we walk away angry because it takes work to do what was asked us of. It’s hard to change the way we think. It’s hard to change the way we talk. It’s hard to choose to not fight when we are offended. It’s hard to love someone who isn’t treating us the way we want or expect to be treated. It’s honestly offensive to have to be the one to bend when we feel SO justified in our actions, attitude and behavior. It’s offensive to “rather be wronged”, or to “turn the other cheek”, or to choose the Fruit of the Spirit when the other person isn’t choosing it. God could just wave His hand and our marriage could be healed… just like that! *snap* Everything is better and we now have a perfect marriage. He could… so why doesn’t He?

Luckily for Naaman he had good, bold servants, ones who really loved him. He first heard about Elisha when his wife’s slave (a “little girl” the bible calls her) who had compassion on him and “wished he could go to their prophet and be healed”. A little slave girl who had been ripped from her family and thrown into slavery by the very people group who now owned her and her master was the captain of the very army who had taken her captive. This little girl had compassion for her master’s well-being. That is a whole lesson in itself about expectations and offenses. But in this particular part of the story, Naaman had servants who traveled with him to visit the prophet. They chose to be brave enough to challenge their master. Even while he was angry and venting, they chose to come near and offer a challenge to his thinking, and a smidgen of hope. They stepped outside of their fear (because servants could lose their position or even their life when they spoke out of turn) and offered him another perspective, even a spark of hope. Their willingness to be bold literally saved this man’s life, changed his destiny and changed his heart. Once Naaman did what the prophet had told him and saw his leprosy not just stop, but literally have all the areas that had been lost replaced with fresh skin “like that of a little child’s”, he was deeply humbled and made the journey back to Elisha to thank him. But, it wasn’t until he saw victory that his heart was softened. The story never says that he finally understood why Elisha didn’t pray and wave his hand over the leprosy. At that point it didn’t matter. The freedom he now experienced was worth the offense, the lack of honor, the journey, the humility of dipping his “high positioned self” into a less superior water in a “less superior place”. It was worth it all, because it changed his life.

Our decision to submit to God, even when we don’t understand His ways, alters our destiny. It brings us freedom, and once we experience that freedom, the journey becomes worth it. I firmly believe that God doesn’t just miraculously “fix” people’s marriages, because they NEED to do the hard work. They NEED to learn to fight for freedom. They NEED to die to pride and unmet expectations before freedom can fully be appreciated. (I am conjecturing here, but I don’t believe Naaman would have been as thankful had a miracle happened… his position was next to the king, he was used to getting what he wanted… he had an entitled mindset and it needed to be broken for full humility and gratitude to happen). I think we are much the same way. We have become entitled. We want what we want the way we want it and as fast as we want it to happen. Many times we don’t have patience for God’s ways. We want our way and we are offended when we don’t get it. After all, wouldn’t a “good God” want to give me the gift of a good marriage?

Whatever your situation is today, whether it’s a troubled marriage or another relationship, whether its finances or job related, when you go to God and ask Him for help, be humble, willing to do whatever He asks, and be willing to do it with all fervency, no matter how hard the task is. Choose to not be offended (yes, it is a choice) when He doesn’t do what you expected Him to. Don’t waste your time on the “why’s”, but go after His word to you. Finally, allow those who you might consider to be beneath you to speak into your life. Like the servants of Naaman, you never know who God might use to show you another perspective. And it just might carry the power to change our destiny.

Healing often takes time, effort, and there is often pain in the process. But it is worth it for the freedom it offers. Expect your healing to be part of your journey and embrace the season. Choose to grow into Christ, not away from Him. In the end, Naaman received his miracle. God has miraculous restoration for you in His heart as well. It just might not look like you expected or come the way you wanted. What choice will you make?

Deuteronomy 30:16 (MSG) “And I command you today: Love God, your God. Walk in His ways. Keep His commandments, regulations and rules so that you will live, really live, live exuberantly, blessed by God, Your God, in the land you are about to enter and possess.”